The work of Leon Polk Smith (1906-1996) is currently featured in two exhibits (in New York at Washburn Gallery and in Chicago at Valerie Carberry), and was recently the focus of a 'Kabinett' at Art Basel Miami Beach.  His paintings and works on paper are included in numerous museum collections across the United States and he is well known to those acquainted with American minimalism. The impact of Leon Polk Smith on several generations of reductivist artists is profound. However, I expect that Smith's work is not familiar to some, or perhaps many, of my readers. While I prefer his early work, I've included images from his entire oevre.

"The content of all of my works for over forty years has been mainly concerned with space and color. And my driving interest in the study of the history of art and its evolvements has been with artists' concepts of space and their use of color."
(Leon Polk Smith, 1982. Published in Leon Polk Smith, Wilhelm-Hack-Museum, Ludwigshafen am Rhein and Musee de Grenoble, 1989)


To consider the work of Leon Polk Smith, it is helpful to acknowledge the influence of Mondrian, which Smith did quite directly in his paintings of the 1940s and 1950s.  The 2006 centenary exhibit at Washburn Gallery shows this quite eloquently.
(All photos in this section are from the Washburn Gallery website).


The current exhibit at Washburn Gallery in NY:  Cherokee | Chickasaw | Choctaw  shows a selection of his work from the 1940s. Smith grew up in Oklahoma and had Cherokee ancestors. The influence of the visual traditions of the Southwest are clearly evident in the work of this period, as is the influence of Mondrian. (All photos in this section are from the Washburn Gallery website).

In the 1950s, Smith began to move away from rectilinear forms.  He also began to work on shaped canvases, with a reduced palette and pared down compositions often limited to just two or three forms. Additional work from the 1950s can be seen below in the section on the exhibit at Valerie Carberry.
(Images in this section are from the Leon Polk Smith Foundation)


The Kabinett installation at Art Basel Miami Beach (from Valerie Carberry Gallery) featured work from the 1950s and 60s. (Photos in this section courtesy of Joanne Mattera Art Blog).

The current exhibit at Valerie Carberry in Chicago, Leon Polk Smith: Space Considered  includes paintings and collages from the mid 1950s through mid 1960s. (All photos in this section are from the Valerie Carberry Gallery website).

"I set out from Mondrian to find a way of freeing this concept of space so that it could be expressed with the use of curved line as well as straight. I soon found that this was not an easy thing to do. After more than a decade of intense search and painting (in 1954) somewhat by accident, while drawing with free line on a spherical surface, I observed a concomitant situation wherein the idea of space and form were complimentary to each other as well as interchangeable."
(Leon Polk Smith, 1961. Published in Leon Polk Smith, Wilhelm-Hack-Museum, Ludwigshafen am Rhein and Musee de Grenoble, 1989).

In the 1960s and 1970s, Smith's focus shifted to clusters of shaped canvases and significantly increased in size. I have included photos from the 1995 exhibit at the Brooklyn Museum to provide a sense of scale. This  exhibit included work from the 1930s through the 1990s. At the museum website are many installation views as well as descriptive information about the evolution of Smith's work.
(All photos in this section are from the Brooklyn Museum website). 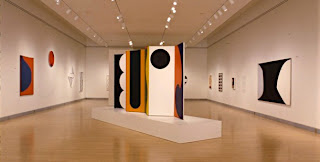 To give you a sense of the dramatic increase in scale, the double panel painting shown above, Form Space #1: Red Wing, 1979, is 48 x 181 inches (in the collection of MOMA).

The 1960s through 1980s brought a return to a brighter, multi-colored palette as Smith continued working with shaped canvases, often in large clusters. The 1990s, the final period of work, brought a renewed interest in line, simplified composition and a reduced palette.

(Images in this section are from the Leon Polk Smith Foundation)


Throughout his fifty+ year career, Leon Polk Smith's work evidenced a joyful embrace of color and form, and it is gratifying that it continues to be actively exhibited.


To see an archive of images along with biographical information and interviews, visit the Leon Polk Smith Foundation.