A personal take on Rockburne

Although I have seen many exhibits of her work over the past thirty years, my recent visit to  Dorothea Rockburne:  Drawing Which Makes Itself (on view at MOMA through January 20, 2014)  prompted me to explore why her work matters to me. After much looking and reading, I understood that Rockburne's appeal came from the open-ended possibilities that her work offered me, and that how she uses materials is central to my experience of her work. I've incorporated quotations from a number of interviews and articles, and a list of links to the complete articles can be found at the end of this post.


But first, a very brief glimpse of the MOMA exhibit.

Drawing Which Makes Itself is organized around a series of works from the early to mid-1970s, executed in a variety of materials, such as carbon-paper, cut and folded paper, kraft paper coated with copal varnish as well as chipboard infused with crude oil. Also included are several pieces from the 1980s in paper, watercolor on vellum and canvas, as well as two fairly recent watercolors. The exhibit title is derived from the large wall and floor installations from the 1970s that are on view (created using carbon, carbon transfer, and pencil on paper).  For an installation view, click here. Many of the works on exhibit inhabit a space somewhere between drawing and sculpture.

Several pieces and series were of particular interest to me.

Locus is a series of six folded paper pieces. Although not initially apparent, these are relief etchings with aquatint on folded paper. There appear to be both incised and embossed lines and some sections of the paper are matte, while other areas have a slightly reflective surface. 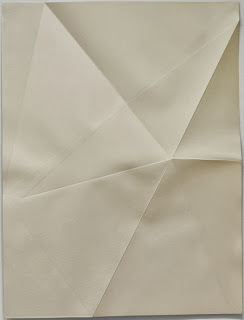 Several pieces from the Copal series are also on view. These drawings, from 1977-79, are executed on Kraft paper with copal oil, varnish, and blue pencil. As with the Locus series, some surface areas are matte, while others are more reflective. Additionally, as the folded layers overlap, there are varying degrees of translucence or opacity. N.B. I couldn't find an image from the Copal series; pictured below is work from similar series.

Perhaps my favorite work in this show is a wall installation titled Scalar. To create this piece, Rockburne soaked pieces of chipboard and paper in crude oil. The resulting panels have a variety of visual textures--some are rather grainy in appearance while others are soft and atmospheric. The rectangular panels are arranged with some overlap and nailed to the wall. An oil saturated sheet of paper emerges from between two panels on the left side, providing the single curved element of the piece, as well as serving to add physical depth to an otherwise flat piece.


My journey with Rockburne's work.

My initial exposure to Rockburne’s work came in the mid-1980s. At that time, although I was mesmerized by the work of Mondrian and Diebenkorn, I was far more comfortable viewing and making work that was to a great degree anchored in representation. So I was puzzled, yet tantalized, by Rockburne’s Angel series, with its juxtaposition of vibrantly hued fields against a tight geometry of folded forms. I was unable to articulate what drew me to her work, but I felt compelled to stay with it. That was the first lesson of her work-- take your time, stay with it, keep looking.  (One piece from the Angel series is included in the MOMA exhibit).

I continued to follow her work over the decades, intrigued by some exhibits, but often finding myself distanced from and unable to find my way in. And there I left it. But now, decades later, the significant evolution of my own work has made it the right time to explore the connections I continue to feel with Rockburne's work.

ROCKBURNE and MATHEMATICS    Much has been made of Rockburne's extensive study of mathematics when she was a student at Black Mountain College. While she did explore set theory and the geometry of the golden section, she insists that her work should not be seen as being about mathematics. Rather, that mathematics is but one facet of thinking that contributes to her work.

“My interest in Set Theory is not that Set Theory has to do with art, because it doesn’t. I am an artist, and it is one of my tools, the way graphite is. The usage of it comes from personal experience.........   In Peru, I visited the ruins at Sacsayhuaman outside of Cusco. The way the stones go together got to me. It’s not about huge stones. The experience of the object relates to particular intellectual inquiries: the decisions of mass and interstices, one never dominating the other. The “Set” of stones sits there quietly, an experience of information “     From an Interview with Dorothea Rockburne by Jennifer Licht, Artforum, March 1972

Although when I look at Rockburne's work I'm not thinking about the way it is informed by her interest in mathematics, her comments about set theory provide me with another way of considering my own explorations. Set theory is very much about identifying the attributes that establish inclusion or exclusion from the set. While of course, there are underlying rules in my own work, the parameters are often fairly porous in that I never know where the work will take me. When I accept into the painting a form, mark or color that falls outside the preferred attributes, it often becomes the mark around which the piece coalesces. So to the extent that we are aware of the attributes of a set, we become highly attuned to what is possible just beyond it. That was lesson 2, also central to my understanding of Rockburne.


ROCKBURNE and MATERIALS
Perhaps it is our expectation that narrowing one's choice of materials will necessarily narrow the range of outcomes.  But with Rockburne I find that not at all to be the case. It is as if by deliberately limiting the materials she uses for each series, she has freed up what she can achieve. The works within a series don't repeat an experience but instead offer subtle variations on it. And what we can glean from looking at just one piece is magnified considerably after spending time with several pieces in the series.

Clearly, her choice of materials impacts our experience, but it does not define it. (Her selection of crude oil and chip board for Scalar was deliberate, but due in large part to its low cost and ready availability.) Again, as with her familiarity with mathematics, her work isn't about a particular material (such as crude oil or carbon paper), but rather its use reveals other things she wants us to notice. By coating parts of a sheet of kraft paper with copal varnish, we experience the way light falls on different areas of the sheet, its translucence or opacity. Locus got me thinking about hard and soft folds and how we perceive what is barely visible. In the Angel series, by folding a sheet of brilliant but disembodied color into stark geometric forms, she makes us aware of planes, space, and light, and yes, the beauty of the colors.  Lesson 3--limit your options and then run wild, see where it can take you.


ROCKBURNE and SLOW ART
Rockburne's work is very much about expanding our perceptions, not limiting them. One needs to be patient, because what her work offers is not revealed quickly. However, Rockburne suggests that while she works for "a complexity of ideas. . . . that doesn't mean that the work is complicated."  Jennifer Licht, Artforum, March 1972


“One of the keys to Rockburne’s work is that there is no explicit message encoded within her overlapping, interpenetrating, light filled planes. They are neither comments about the art object nor icons to the ineffable. They manage to accomplish something far more difficult in these grim, materialistic times; they evoke beauty, openness, the usefulness of doubt, and the possibility of creative freedom. Both deeply self critical and wildly assertive, their dynamic realm is riddled with uncertainties, and yet inhabited by imagination and desire.”    John Yau, from the introduction to a 1989-1990 exhibition at Andre Emmerich Gallery.

Rockburne's work is achieved after a great deal of thinking and planning, but is not in any way didactic. Instead of channeling a viewer towards a particular answer, with patience one arrives at a place of wonder. So I have returned to the first lesson I absorbed from her work many years ago--it isn't necessary to have understanding to find meaning, just keep looking.

Click here for the current Rockburne exhibit at MOMA.

Click here for information about a Rockburne exhibit now up at Jill Newhouse Gallery, New York. The exhibit includes additional works from the 1973 series, Drawing Which Makes Itself.